Steelyard Peson in the spotlight in the United Kingdom! 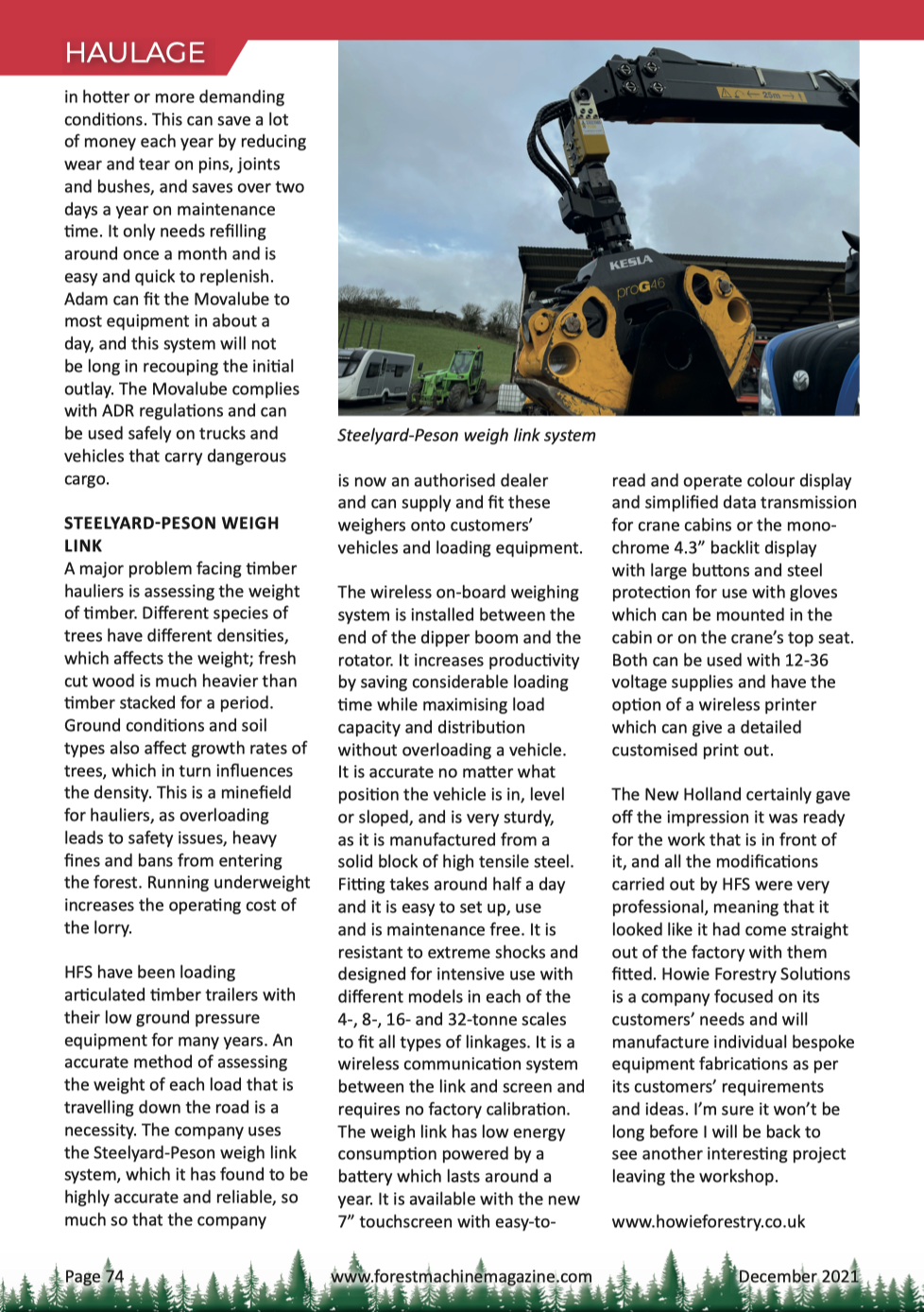 "A major problem facing timber hauliers is assessing the weight of timber. Different species of trees have different densities, which affects the weight; fresh cut wood is much heavier than timber stacked for a period. Ground conditions and soil types also affect growth rates of trees, which in turn influences the density. This is a minefield for hauliers, as overloading leads to safety issues, heavy fines and bans from entering the forest. Running underweight increases the operating cost of the lorry."

"HFS have been loading articulated timber trailers with their low ground pressure equipment for many years. An accurate method of assessing the weight of each load that is travelling down the road is a necessity. The company uses the Steelyard-Peson weigh link system, which it has found to be highly accurate and reliable, so much so that the company is now an authorised dealer and can supply and fit these weighers onto customers’ vehicles and loading equipment."

"The wireless on-board weighing system is installed between the end of the dipper boom and the rotator. It increases productivity by saving considerable loading time while maximising load capacity and distribution without overloading a vehicle. It is accurate no matter what position the vehicle is in, level or sloped, and is very sturdy, as it is manufactured from a solid block of high tensile steel. Fitting takes around half a day and it is easy to set up, use and is maintenance free. It is resistant to extreme shocks and designed for intensive use with different models in each of the 4-, 8-, 16- and 32-tonne scales to fit all types of linkages. It is a wireless communication system between the link and screen and requires no factory calibration. The weigh link has low energy consumption powered by a battery which lasts around a year. It is available with the new 7” touchscreen with easy-to-read and operate colour display and simplified data transmission for crane cabins or on the crane’s top seat. Both can be used with 12-36 voltage supplies and have the option of a wireless printer which can give a detailed customised print out." 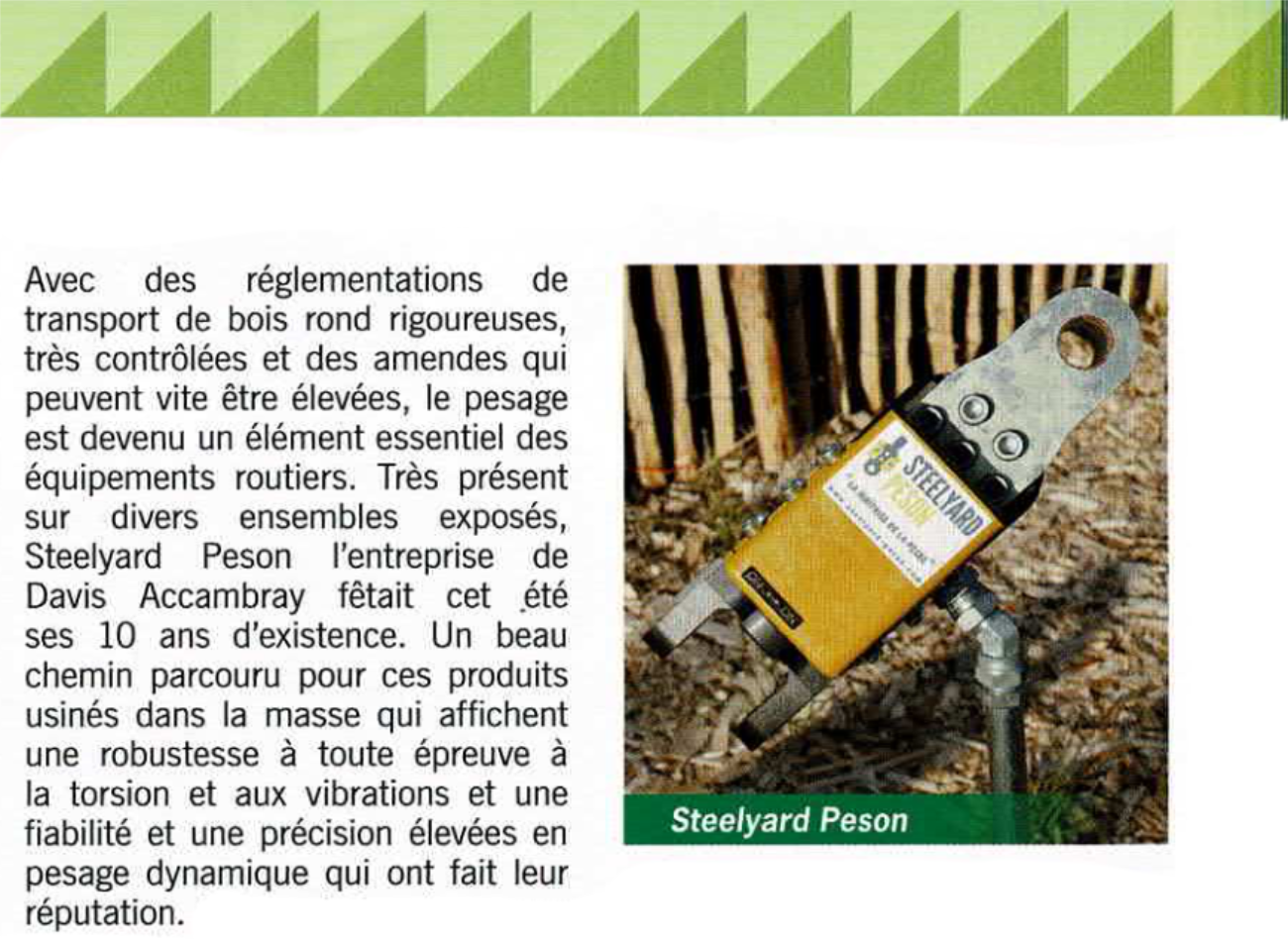 A successful edition of Forexpo!

"Everyone wondered about the content of this trade fair, which was postponed twice and in an uncertain context. Would exhibitors and visitors be present in numbers? Would the situation allow the event to run smoothly? In the end, no fewer than 379 exhibitors of 23 different nationalities were keen to attend, and they were well advised to do so, as 23,361 visitors also took part. A figure that exceeded the organisers' expectations. A return to a semblance of normality in a good atmosphere of recovery, which allowed everyone to enjoy themselves and to get back in touch with the latest news in forestry mechanisation.

Translation extract p.15: "With strict, highly controlled roundwood transport regulations and fines that can quickly become high, weighing has become an essential part of road equipment. STEELYARD PESON, David Accambray's company, was present on various exhibits and celebrated its 10th anniversary this summer. The company has come a long way with its product made out of one solid bloc of stainless steel, which are extremely robust against torsion and vibration, and have a high level of reliability and precision in dynamic weighing, which has made their reputation. 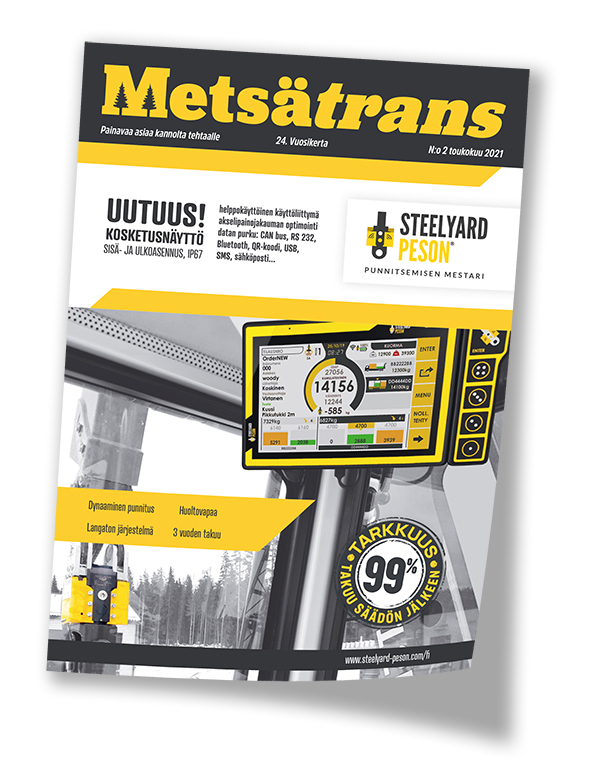 Some extracts from the article:

"Timber crane scales have been the talk of the industry over the last few years, and even more so this winter. Compared to the price of the whole truck, this is a relatively inexpensive, but even crucially important piece of equipment in terms of profitability.

"Närhi Oy has been an importer of Steelyard-Peson products for five years. According to Managing Director Mr. Tomi Haring, more than 50 scales have been sold in Finland. Initially for Kesla timber cranes, but later also for Epsilon and Loglift cranes.

"Steelyard-Peson is an accurate scale. With all the penalties, accuracy is of course the most important feature of a scale, but it is also a matter of road safety. The load has to weigh what it is supposed to weigh," Mr. Haring points out.

"Although the manufacturer is French, through Närhi customers can get support from Finland and in Finnish."

"According to Mr. Haring, the Steelyard-Peson scale is not the cheapest on the market, but the most accurate. What becomes expensive for the customer is if the weight of the load is not correct."

"VTA Tekniikka is the Finnish importer of Epsilon cranes, and they also often install wireless scales on cranes [...] thanks to the importer they can also be obtained quickly if needed," says Mr. Jari Kossi from VTA Tekniikka."

"Mrs. Janna Wolin, who sells Loglift and Jonsered timber cranes, agrees. Steelyard-Peson has now become one of the options alongside the others. [...] they are a very valid alternative and we have sold several of them," says Mrs. Wolin."

"At Steelyard-Peson, the margin of error in weighing has been in the order of 1%, and even customers think that's a very good level. Accuracy and reliability give peace of mind [...]", says Mr. Kossi.

"For Mr. Jarkko Vesala, the accuracy of the scales is also more important than the price. I'm happy to pay a little more if I can trust the device to work. Even one driving ban to the factory as a result of an inaccurate weighing result quickly pays off the entire price of the scale. [...]", ," concludes Mr. Vesala. 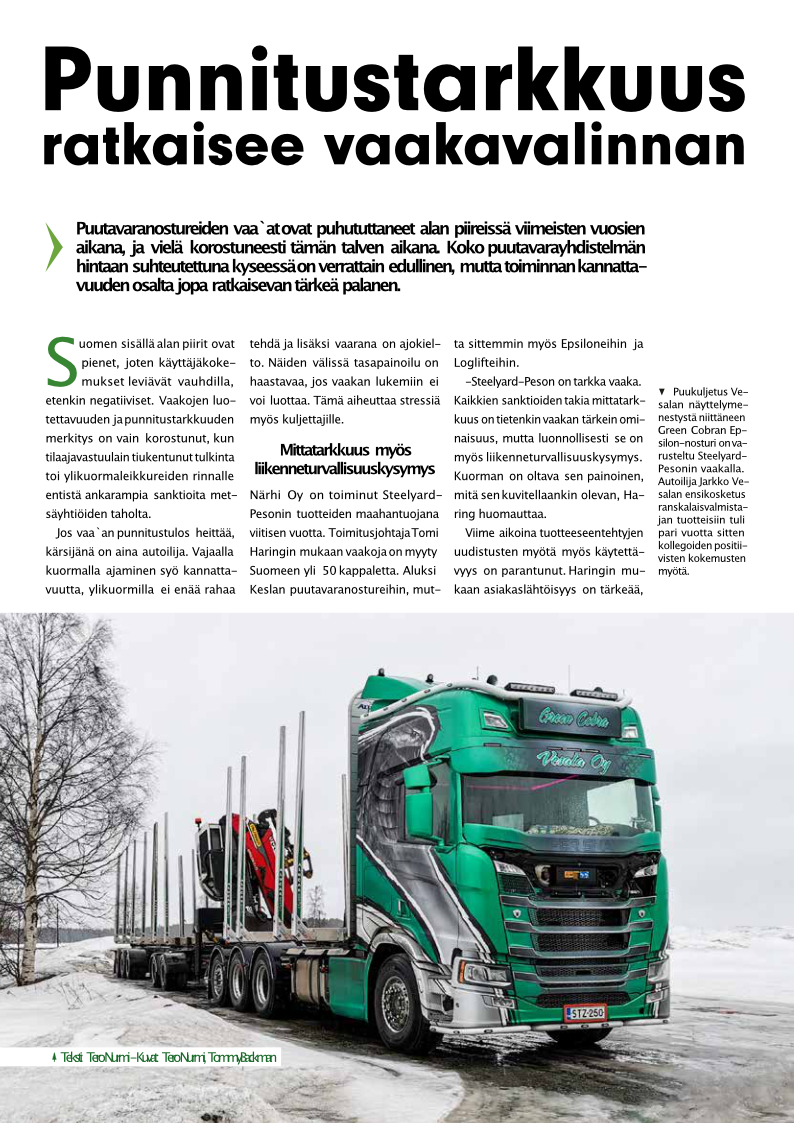 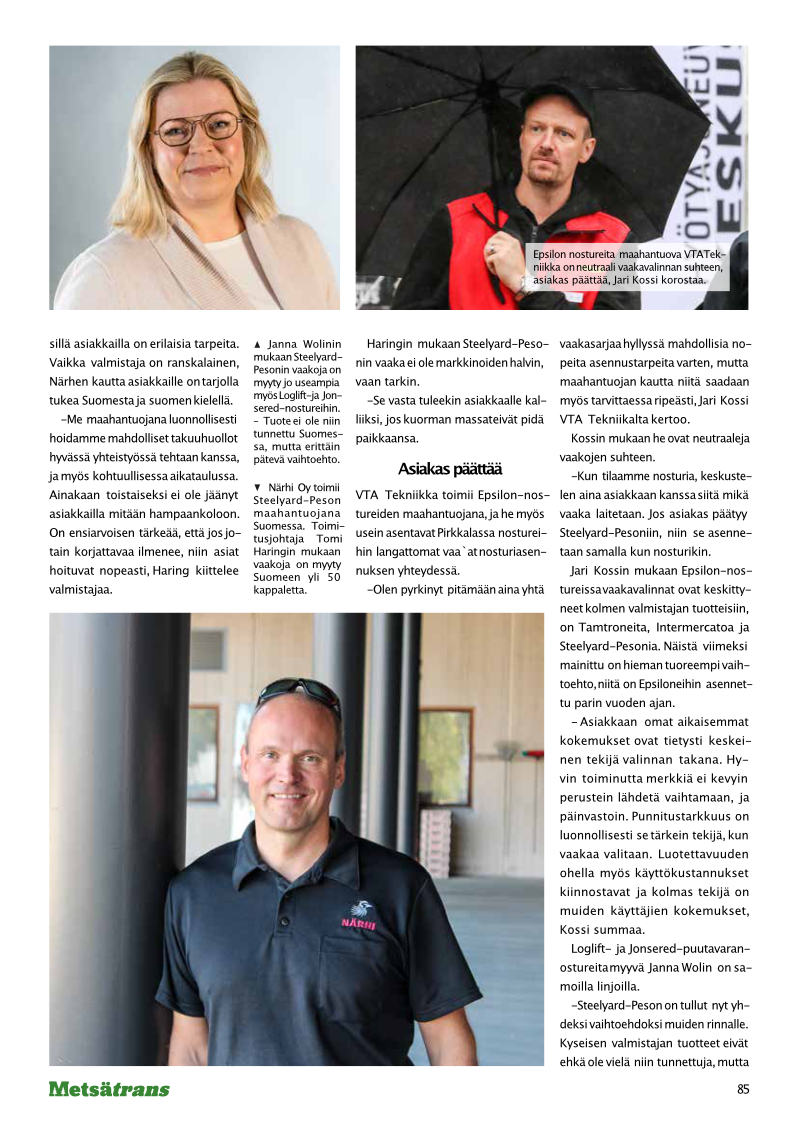 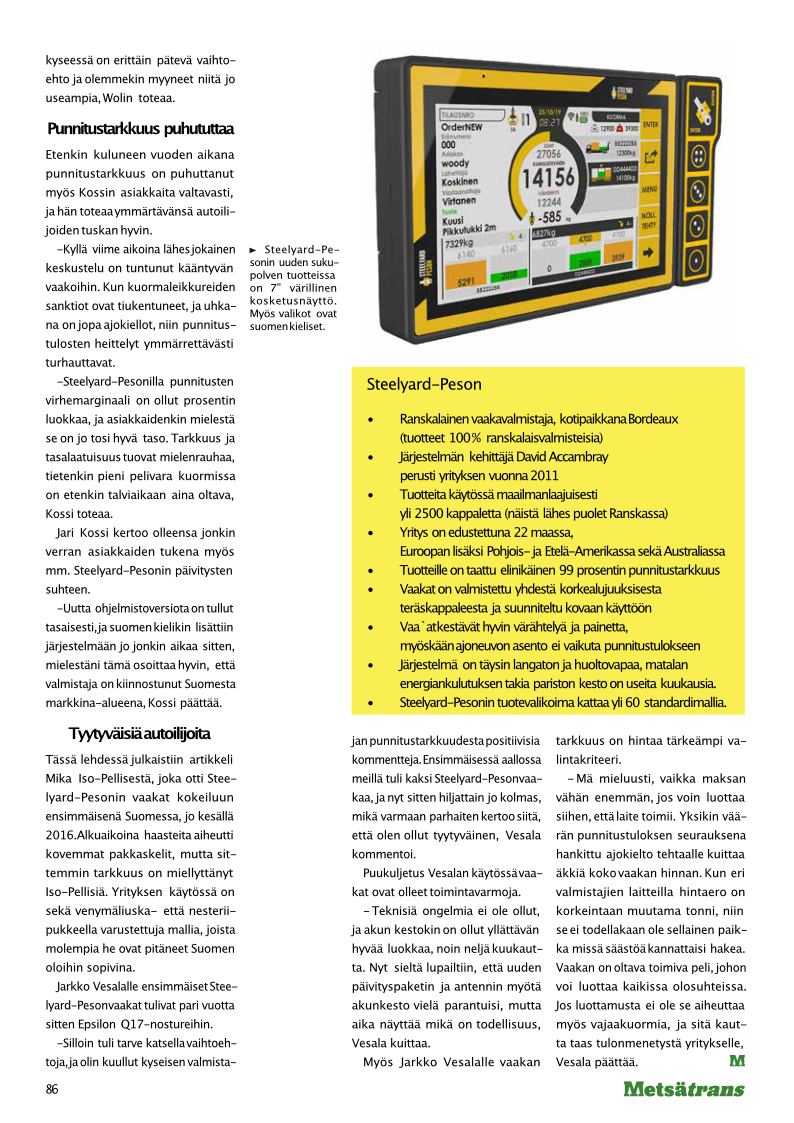 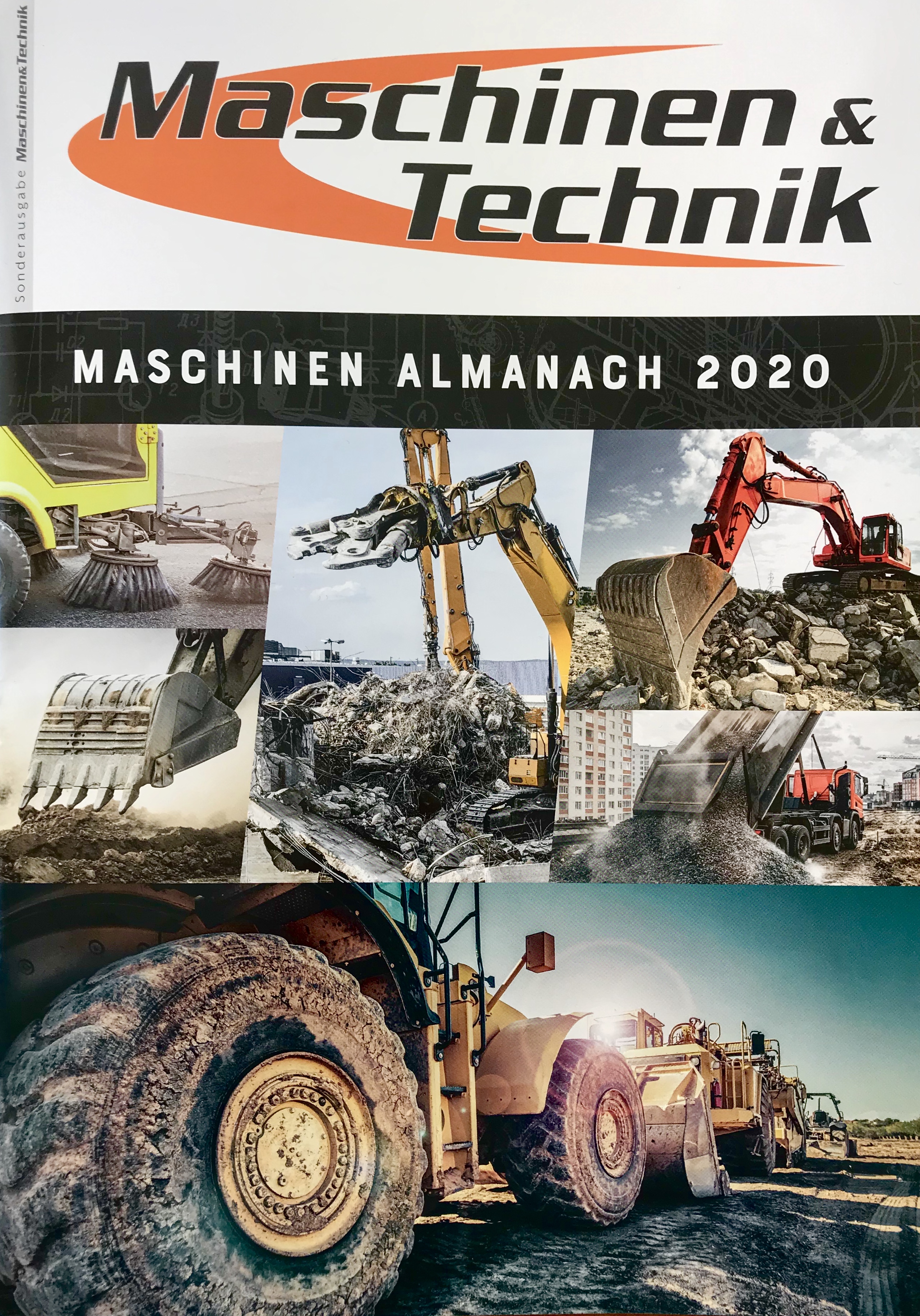 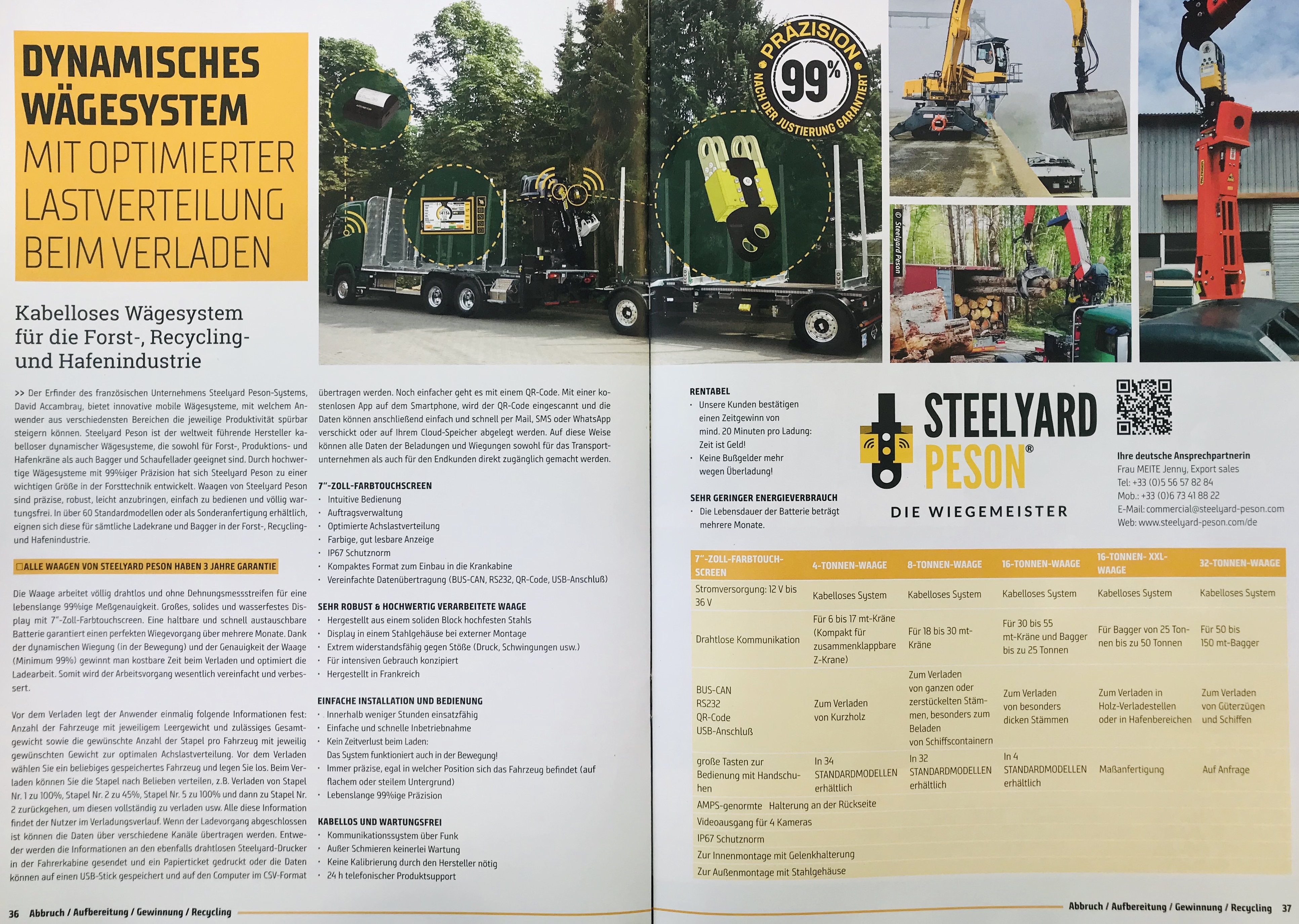 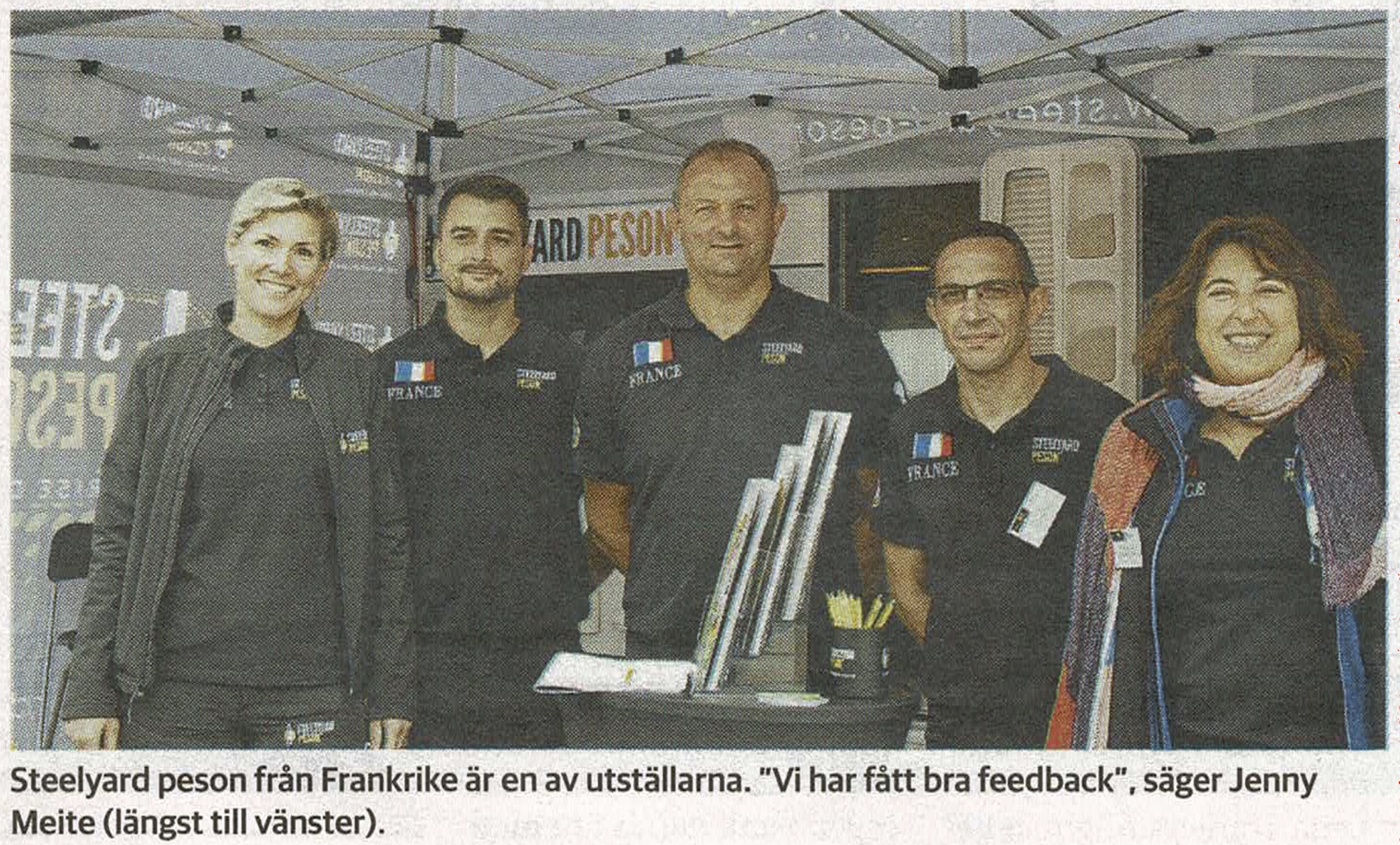 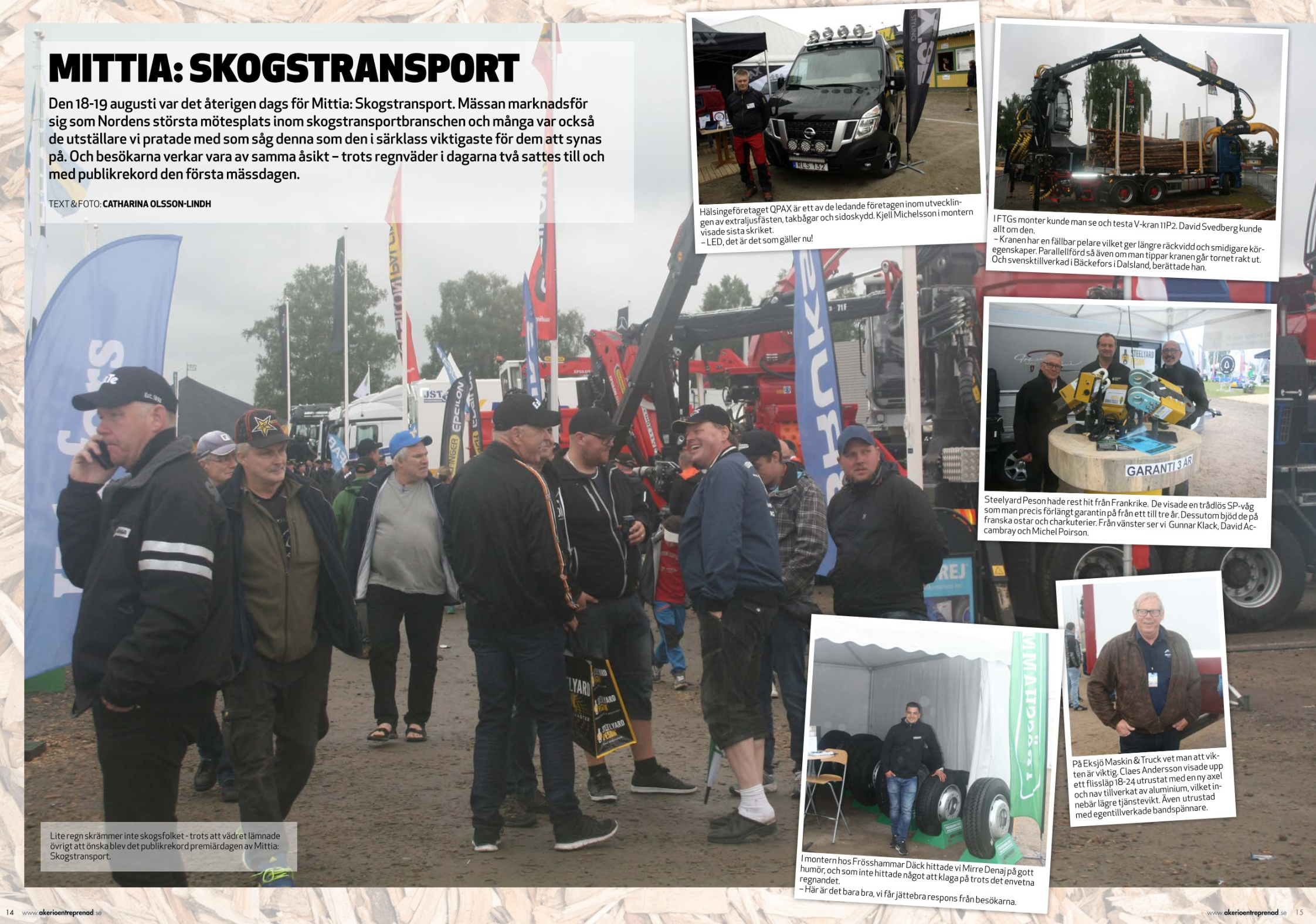 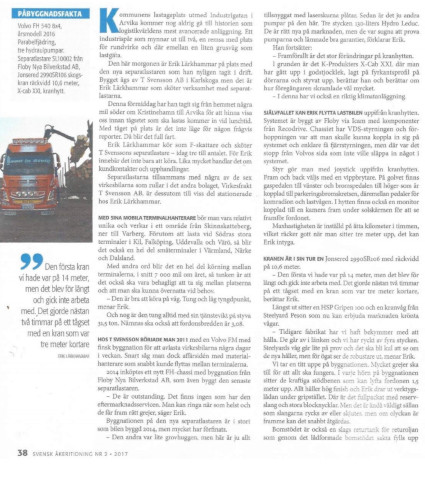 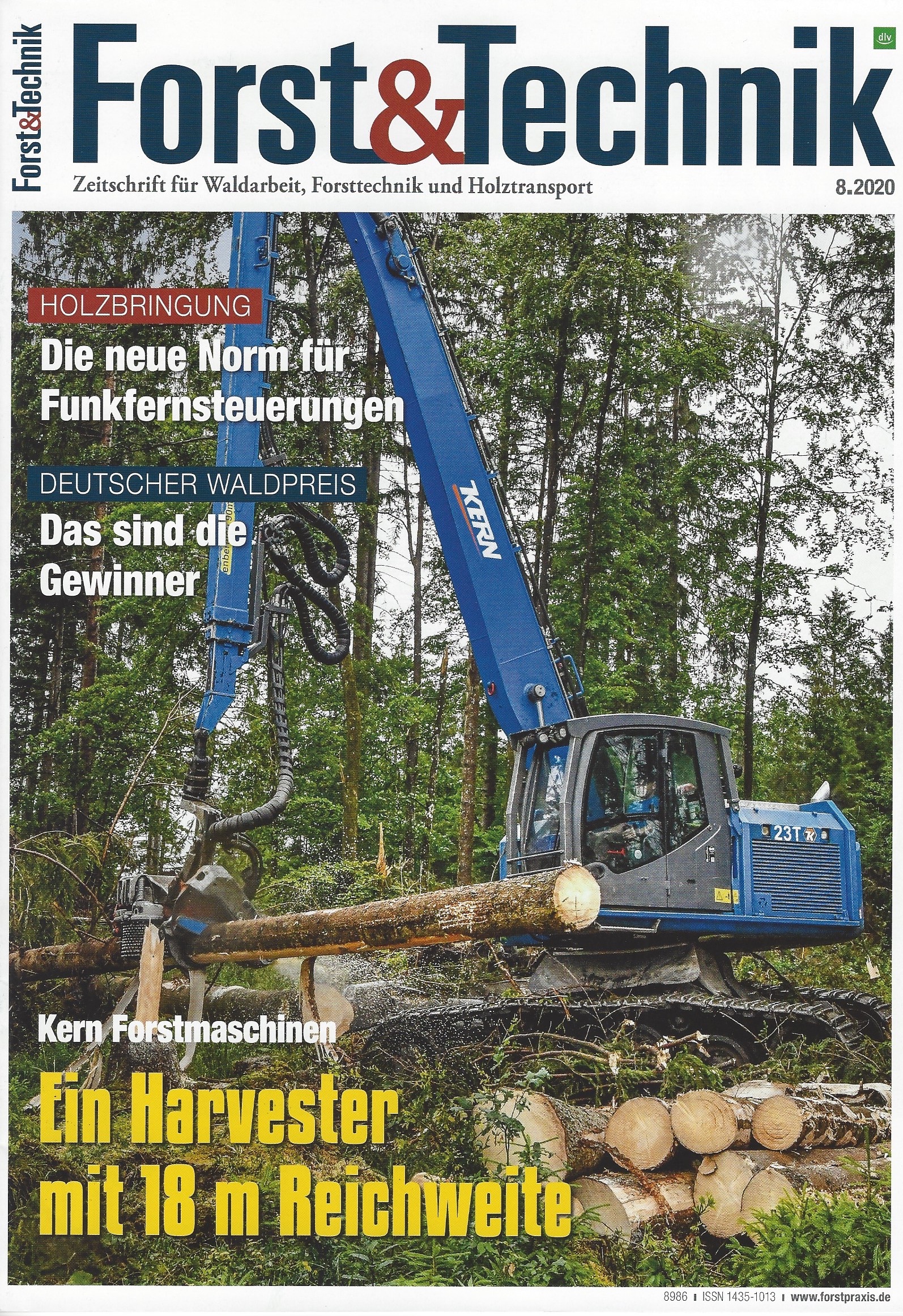 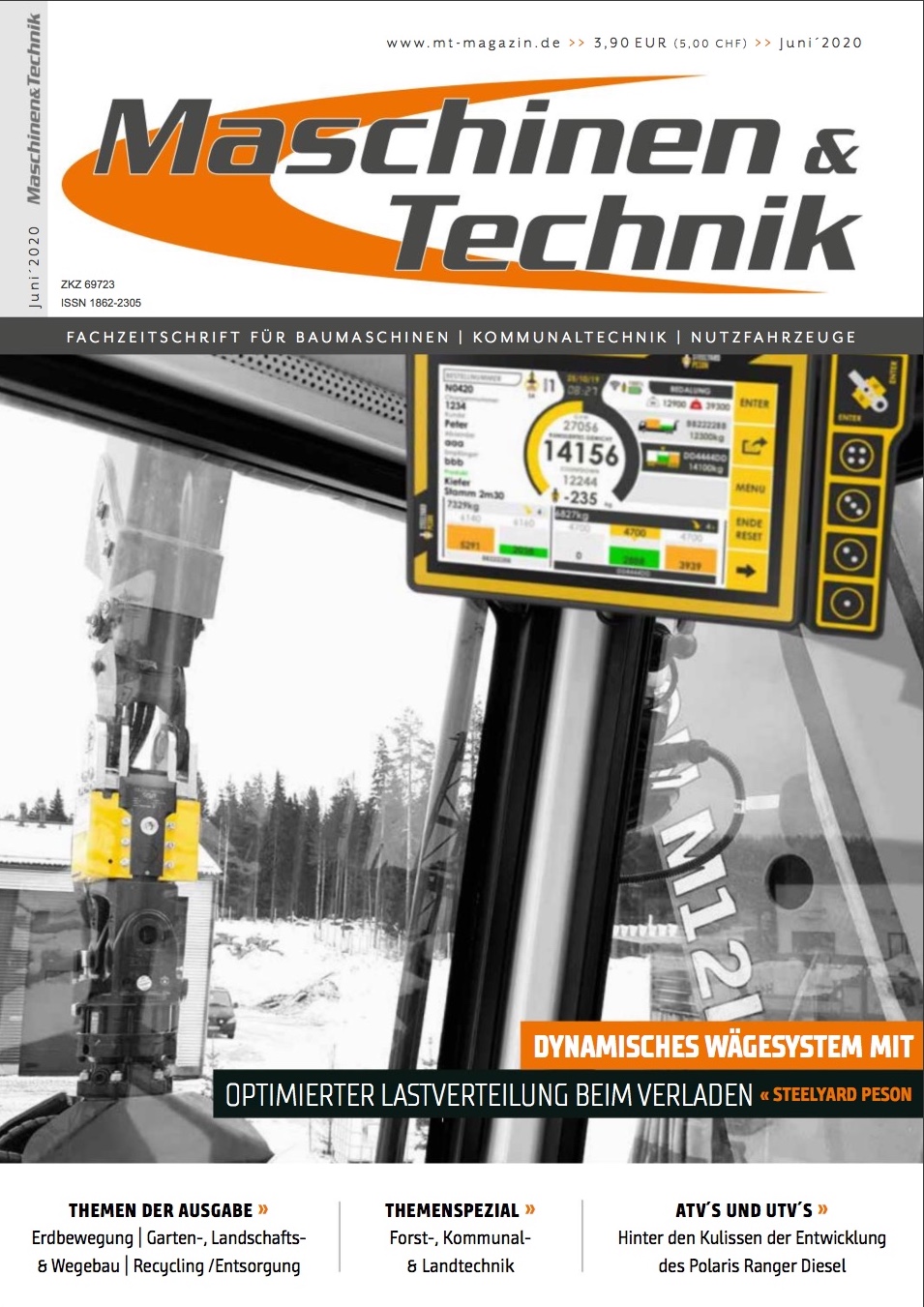 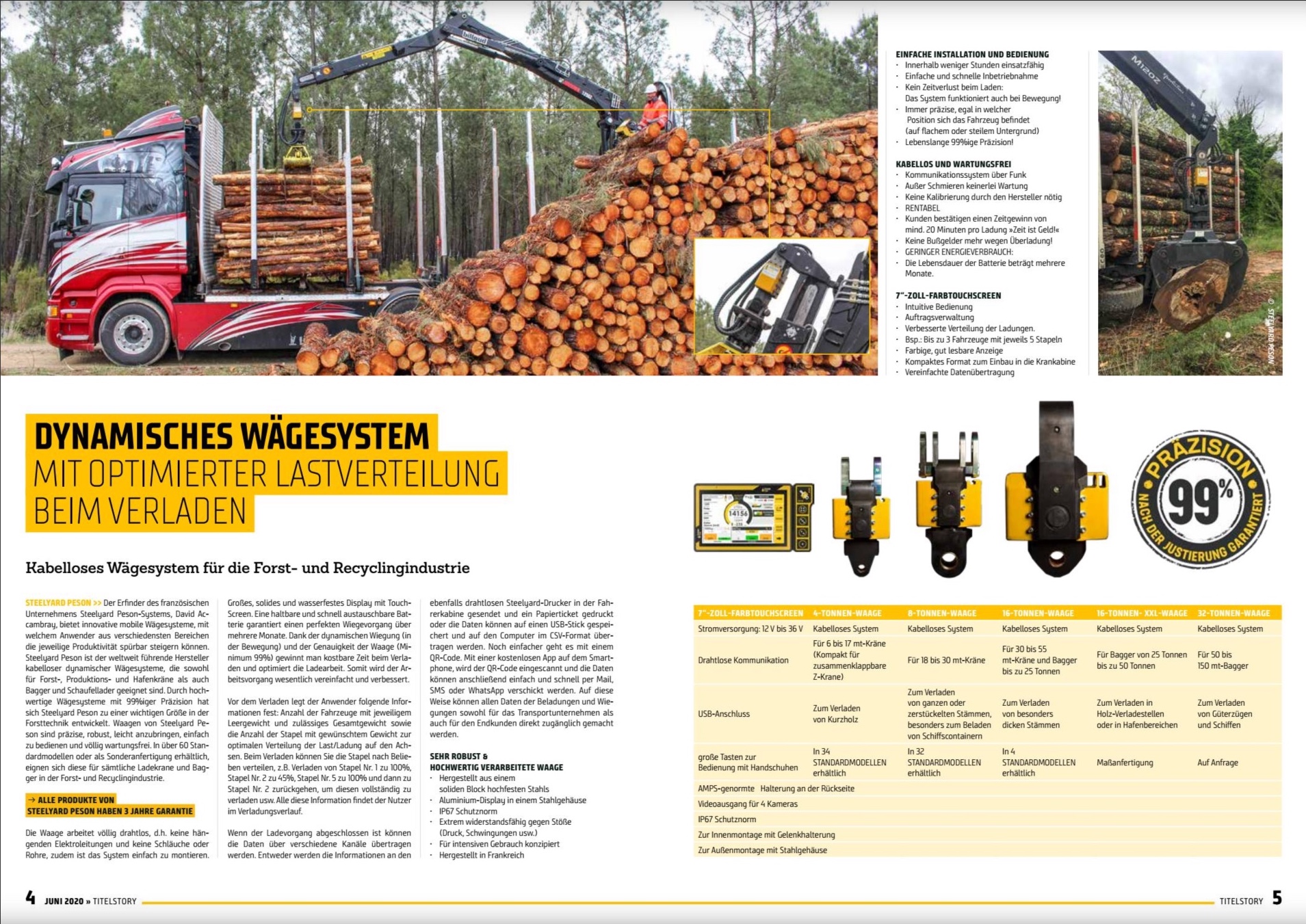